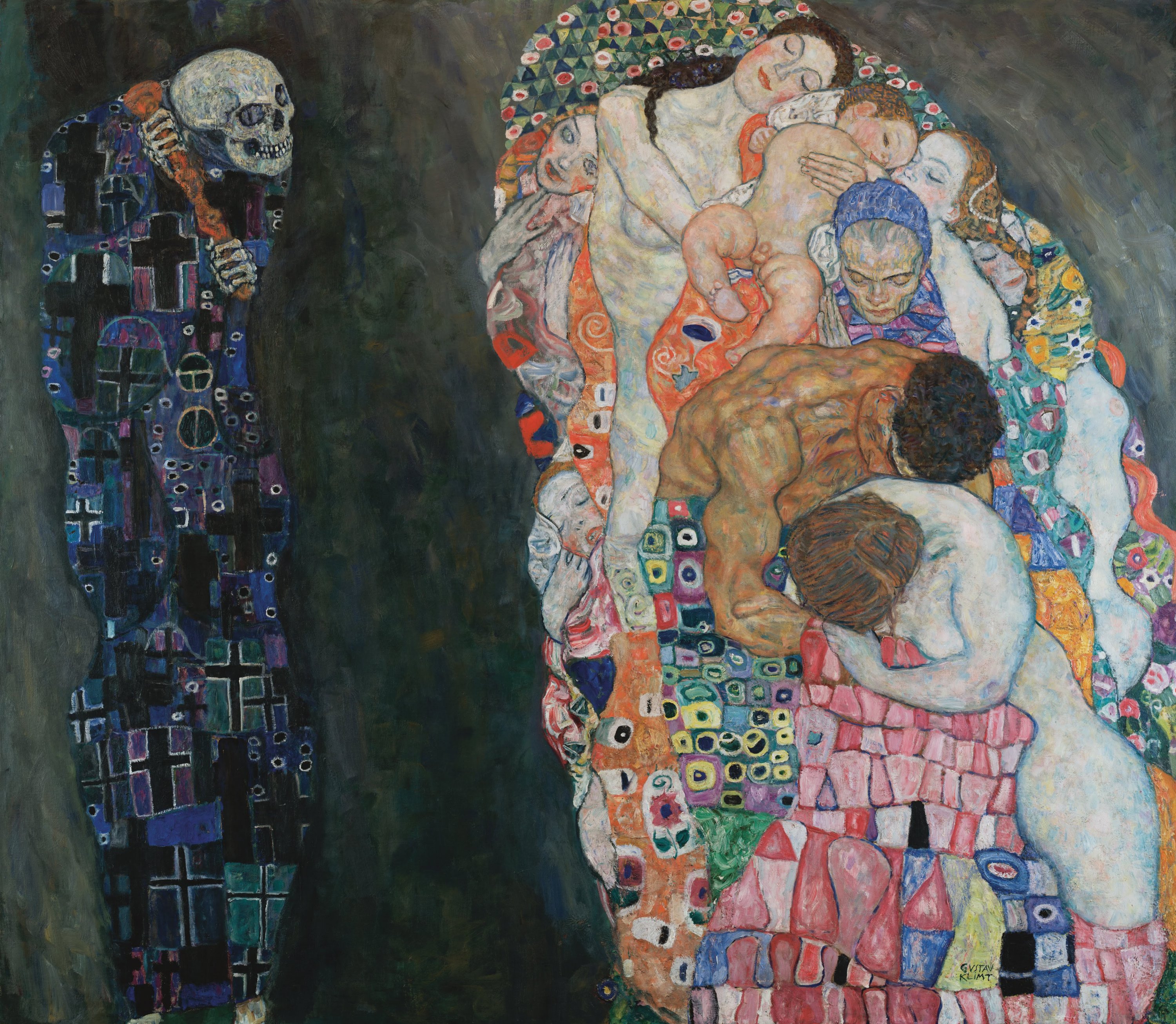 Death and Life is a Symbolist Oil on Canvas Painting created by Gustav Klimt from 1910 to 1915. It lives at the Leopold Museum in Vienna. The image is in the Public Domain, and tagged Allegory and Death in Art. DownloadSee Death and Life in the Kaleidoscope

There’s something fun about skulls. Once the shock of a skinless, eyeless head dissipates, notice the grin—there’s a hint of humor, isn't there? Gustav Klimt must have seen the droll side of the human skull, since his personification of death in the monumental canvas Death and Life positively vibrates with weird charisma.

Klimt called Death and Life his most important figurative work, and it certainly won him the acclaim to back up that statement. After winning first place in the 1911 International Art Exhibition in Rome, over the next twelve years the artwork went on to be exhibited in Dresden, Budapest, Mannheim, Prague, Berlin, Stockholm, Copenhagen, Zurich and Vienna. Eventually it made its way to New York and London in the 1960s.

And its popularity should come as no surprise. At nearly six feet tall, the entwined figures of life and statuesque reaper are life-sized and positively glittering in Klimt’s signature explosion of color and pattern. It’s an easy artwork to understand—look, there’s all the stages of human life: a baby in his mother’s arms, a child, a youth, a strong mature man and wise woman in a blue cap. Vigor and color tumbled together in a glorious messy heap, and off to the side, peeking in from the void, our stylish death robed in crucifixes. Great stuff.

Klimt’s visual style is so strong that it hides what a strange composition this actually is. Our dueling metaphors are huddled into two amorphous lumps, floating in a dark sea—and this was intentional. In 1915, four years into its world tour, Klimt made substantial changes to the artwork, painting over the original background, which was apparently gold-leafed like his portrait of Adele Bloch-Bauer. It’s odd to imagine these same figures on a sea of shimmering gold. How different did it feel? Despite the addition of the somber gray, Death and Life feels both sincere and optimistic. After all, it could have been called Life and Death, with death as the logical end of all things—in this black ocean death may come, but life will always follow.

I know death is supposed to be holding a club, but does it look like a pepper grinder to anyone else?

Got questions, comments or corrections about Death and Life? Join the conversation in our Discord, and if you enjoy content like this, consider becoming a member for exclusive essays, downloadables, and discounts in the Obelisk Store.

Outside a Roman Hostelry

Pier and Ocean (Composition No. 10)