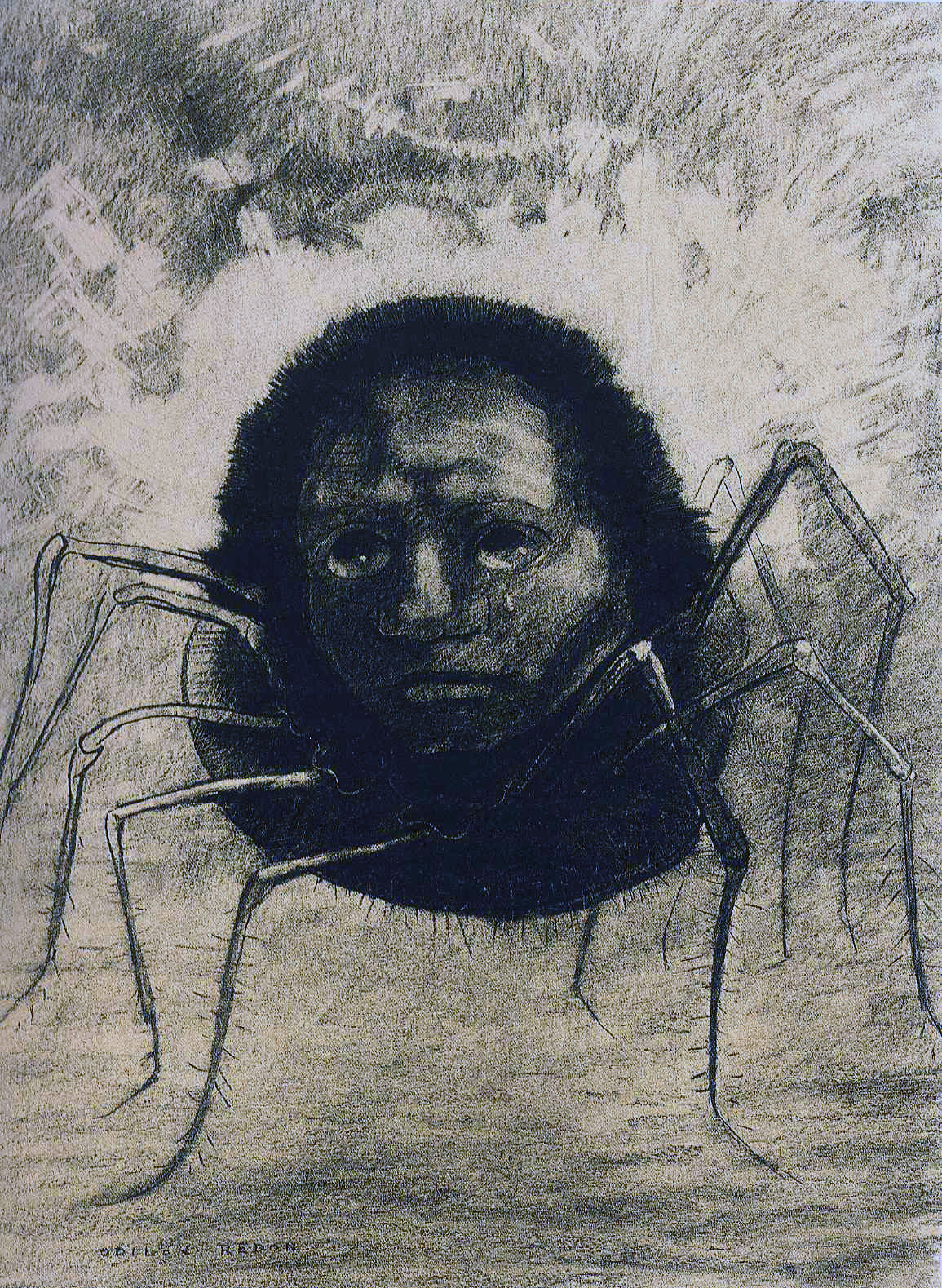 The Crying Spider is a Surrealist and Symbolist Charcoal Drawing created by Odilon Redon in 1881. It lives in a private collection. The image is in the Public Domain, and tagged Melancholy, Monsters and Spiders. DownloadSee The Crying Spider in the Kaleidoscope

There’s something of the classroom doodle to the charcoal sketches Odilon Redon called his noirs. Weird monsters, spiders, hot air balloons, but check it out man, the balloon is actually an eyeball. These creatures are given no context or background, floating in a dark void or propped against featureless walls. They are surreal visions that capture our imagination by capturing an instantly relatable emotions.

Redon drew The Crying Spider in 1881 when he was forty-one. A dedicated but unsung artist for the previous decade, Redon worked almost exclusively in charcoal, switching occasionally to lithography to reproduce his drawings in albums. His 1879 album Dans le Rêve, In The Dream, had won him minor acclaim but at the time of the Spider he was largely unknown.

The spider itself is a perfect example of the contrasting feelings Redon’s work invokes. A pendulous, hairy body crouches under eleven spindly legs, each rendered quickly and with little detail. Emerging from the unsettling thorax is a human face. It’s a disquieting juxtaposition that could be used to shock or disgust, but Redon’s sensitive, detailed rendering of the face invites sympathy instead. A broad nose, wide almond eyes looking upward, and a wreath of dark bristle-brush hair. It is not a face contorted with rage or pain, and the single tear on its cheek is one of gentle sadness.

Redon drew monsters, but they are monsters that feel deeply, and while they float most often alone, viewed together they invite us into a surprisingly quiet, sweet-natured dreamworld that’s difficult to leave, and impossible to forget. Redon described this world as a retreat, saying: “I have often, as an exercise and as a sustenance, painted before an object down to the smallest accidents of its visual appearance; but the day left me sad and with an unsatiated thirst. The next day I let the other source run, that of imagination, through the recollection of the forms and I was then reassured and appeased.”

Got questions, comments or corrections about The Crying Spider? Join the conversation in our Discord, and if you enjoy content like this, consider becoming a member for exclusive essays, downloadables, and discounts in the Obelisk Store.

Death: “My Irony Surpasses All Others”

The Child and the Rats

Edge of a Wood