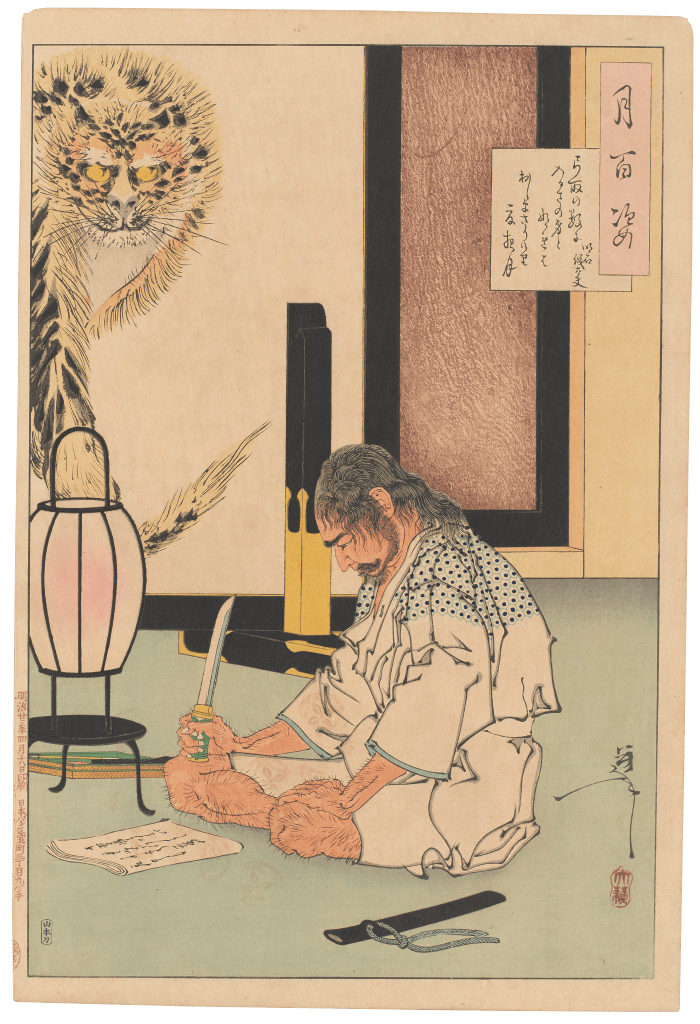 There’s a lot happening in this quiet, somber composition by Tsukioka Yoshitoshi. A man sits cross-legged with his head bowed, eyes fixed on a sheet of calligraphy that lays in front of him. His hand grips an unsheathed knife. This man is the samurai Akashi Gidayū, general to Akechi Mitsuhide. Gidayū has been savagly defeated in The Battle of Yamazaki, and though his army was outnumbered 2 to 1, he’s decided the only honorable path is seppuku ritual suicide. Before driving his knife into his stomach, he has written a Jisei, or a “farewell poem to life".

Writing Jisei was a common practice among Japan’s literati, dating back to 686 CE. Jisei were typically in the tanka, or short poem style, and often described scenes in nature, the passing of seasons, or the inevitability of change. It is often difficult to translate these poems from the Japanese, since it was common to use words with multiple meanings to create layers of metaphor and symbolism.

Mitsuhide refused Gidayū’s request to commit seppuku, but the proud general secludes himself and prepares to end his life. In his last moments, he stares at his poem, which reads:

As I am about to enter the ranks of those who disobey
ever more brightly shines
the moon of the summer night.

Kiyohime, Emerging from the Hidaka River, Turning into a Serpent