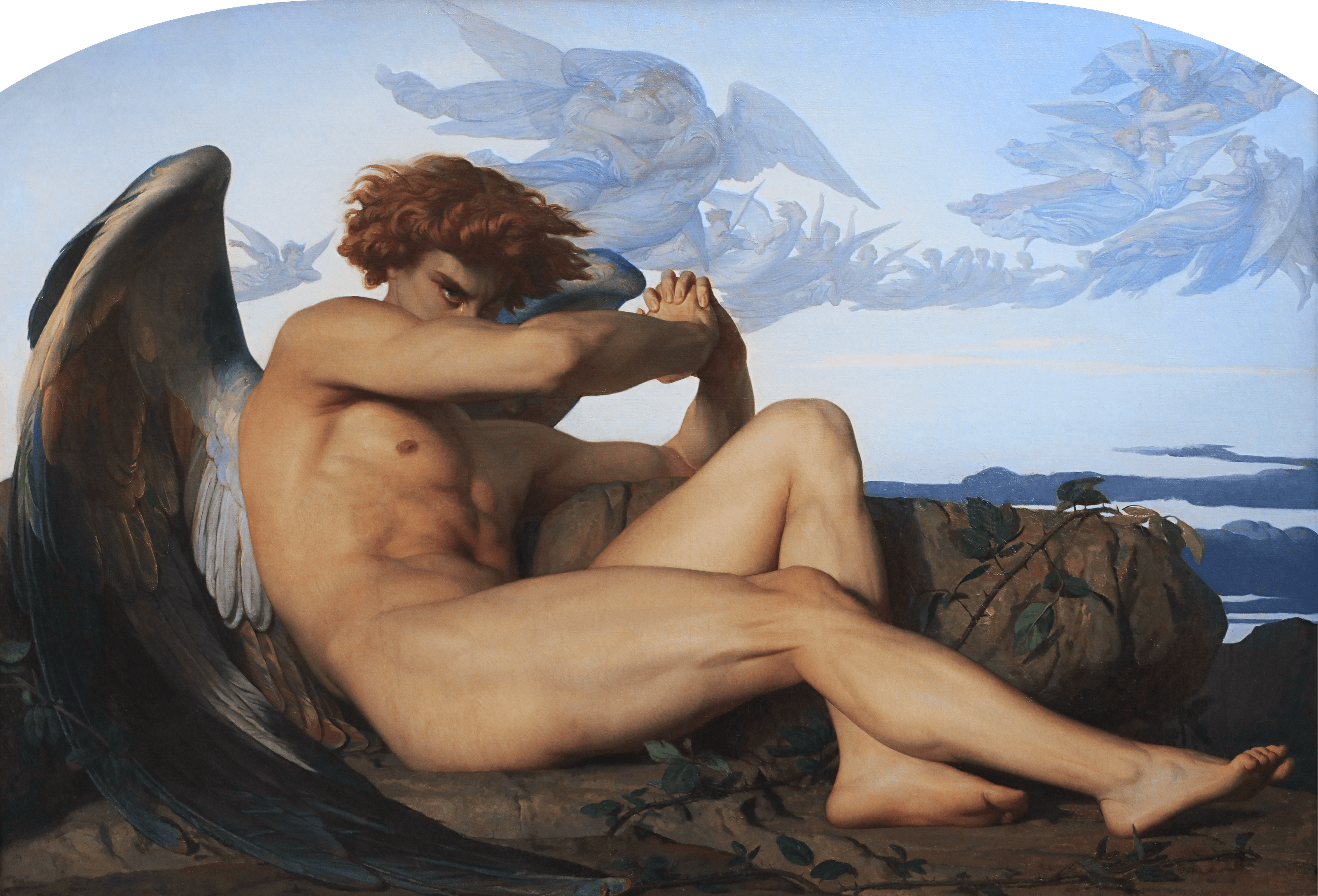 Fallen Angel is an Academic Oil on Canvas Painting created by Alexandre Cabanel in 1847. It lives at the Musée Fabre in France. The image is in the Public Domain, and tagged Angels and Satan. DownloadSee Fallen Angel in the Kaleidoscope

The L’Ange Dechu, or Fallen Angel, may be one of the hottest artworks ever made. A winged nude shields his face behind flexed arms. His mane of hair snaps in the wind, and brows curl over red-rimmed eyes and a tear of anger. His body is perfect. His posture appears reposed, but each muscle is flexed with potential energy. Cast from heaven—this is the moment before he rises again.

The year was 1847, and the 24-year-old Alexandre Cabanel was well on his way to becoming one of the foremost geniuses of French academic painting. Cabanel had joined the École des Beaux-Arts in Paris at 17, had exhibited work in the Paris Salon at 21, and won the prestigious Prix de Rome scholarship at 22. Cabanel’s early work played to the academic tastes of the time, focusing on religious themes. His painting in the salon was of a sorrowful Christ in the Guardian of Olives. His Prix de Rome winner was another Christ, this time on trial at the Praetorium, confronted by Pontius Pilate. But these paintings, while skillful, lack any real emotion. Jesus looks dispassionate. Did salon tradition dictated a sleepy Jesus, or was Cabanel playing it safe?

And then in 1846, Cabanel hit a speed bump. Pulling from classical Greek theater, he painted a large-scale nude of the athletic Orestes, son of Agamemnon, and the academy judges hated it. “An oversized and inept composition” was their savage feedback.

Enter the sexy angel. You know who he is.

After his previous rejection by the salon, Cabanel submitted the Fallen Angel, the first depiction of the devil submitted by a student. If he had aimed to cause some drama, he succeeded. The salon judges were first shocked, and then displeased. Sybille Bellamy-Brown quotes the judges response in her book on Cabanel Procès verbaux de l’Académie des Beaux-Arts, saying “…The movement is wrong, the draughtsmanship imprecise, the execution deficient…” and on top of that, it was considered too romanticist in its style. “…That’s my reward for all the trouble I gave myself not to submit an average piece of work…” wrote Cabanel in a letter to his friend and patron Alfred Bruyas.

It took three more years for Cabanel to win the critics and judges to his side with the monumental Death of Moses and from there, a consistent legacy of muscular, melodramatic work made him the anchor of the French academy. But for our money it all started here, an angel with eyes on fire.

Hi TikTok! Got questions about the Fallen Angel? Hit up our Discord

Got questions, comments or corrections about Fallen Angel? Join the conversation in our Discord, and if you enjoy content like this, consider becoming a member for exclusive essays, downloadables, and discounts in the Obelisk Store.

The Charm of the Evening

Self Portrait (Inn of the Dawn Horse)

Takiyasha the Witch and the Skeleton Specter