The Childhood of Mary Virgin 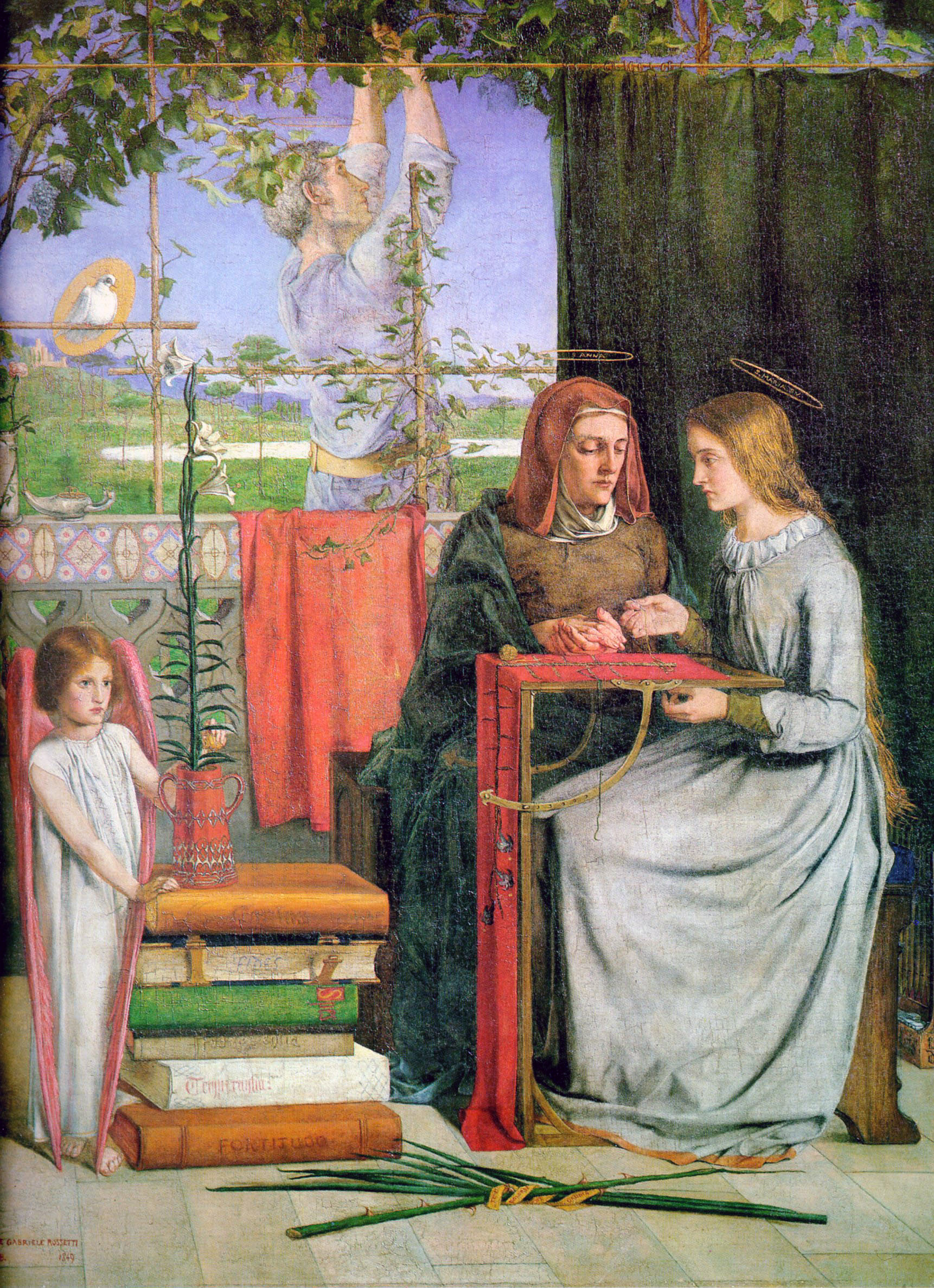 The Girlhood of Mary Virgin was Dante Gabriel Rossetti’s first major oil painting, painted when he was 21 years old. Exhibited in 1849 at the Free Exhibition in London, it carried the initials “PRB” for “Pre-Raphaelite Brotherhood”. The initials announced (in coded form) the arrival of a new movement in British art. Rossetti described the work in his 1848 letter to Charles Lyell, saying:

“It belongs to the religious class which has always appeared to me the most adapted and the most worthy to interest the members of a Christian community. The subject is the education of the Blessed Virgin, one which has been treated at various times by Murillo and other painters,—but, as I cannot but think, in a very inadequate manner, since they have invariably represented her as reading from a book under the superintendence of her Mother, St. Anne, an occupation obviously incompatible with these times, and which could only pass muster if treated in a purely symbolical manner. In order, therefore, to attempt something more probable and at the same time less commonplace, I have represented the future Mother of Our Lord as occupied in embroidering a lily,—always under the direction of St. Anne; the flower she is copying being held by two little angels. At a large window (or rather aperture) in the background, her father, St. Joachim, is seen pruning a vine. There are various symbolic accessories which it is needless to describe”

Attached to the picture was a gold-faced sheet of paper containing two sonnets on the painting. (This gold sheet is no longer with the painting.) The first sonnet is a verbal translation of the iconographical details; the second is a literalization of its Catholic symbology. Painting and sonnets together define the special kind of composite art that DGR practiced, a form epitomized in those works that comprise a “double work of art”, a work with both poetical and pictorial components.

This is that blessed Mary, pre-elect
God’s Virgin. Gone is a great while, and she
Was young in Nazareth of Galilee.
Her kin she cherished with devout respect:
Her gifts were simpleness of intellect
And supreme patience. From her mother’s knee
Faithful and hopeful; wise in charity;
Strong in grave peace; in duty circumspect.
So held she through her girlhood; as it were
An angel-watered lily, that near God10
Grows, and is quiet. Till one dawn, at home,
She woke in her white bed, and had no fear
At all,—yet wept till sunshine, and felt awed;
Because the fulness of the time was come.

These are the symbols. On that cloth of red
I’ the centre, is the Tripoint,—perfect each
Except the second of its points, to teach
That Christ is not yet born. The books (whose head
Is golden Charity, as Paul hath said)
Those virtues are wherein the soul is rich:
Therefore on them the lily standeth, which
Is Innocence, being interpreted.
The seven-thorned briar and the palm seven-leaved
Are her great sorrows and her great reward.10
Until the time be full, the Holy One
Abides without. She soon shall have achieved
Her perfect purity: yea, God the Lord
Shall soon vouchsafe His Son to be her Son.

Got questions, comments or corrections about The Childhood of Mary Virgin? Join the conversation in our Discord, and if you enjoy content like this, consider becoming a member for exclusive essays, downloadables, and discounts in the Obelisk Store.

The angel with the serpent

Death and the Maiden

Portrait of Adele Bloch-Bauer I

The Flight into Egypt

Self Portrait with Pipe