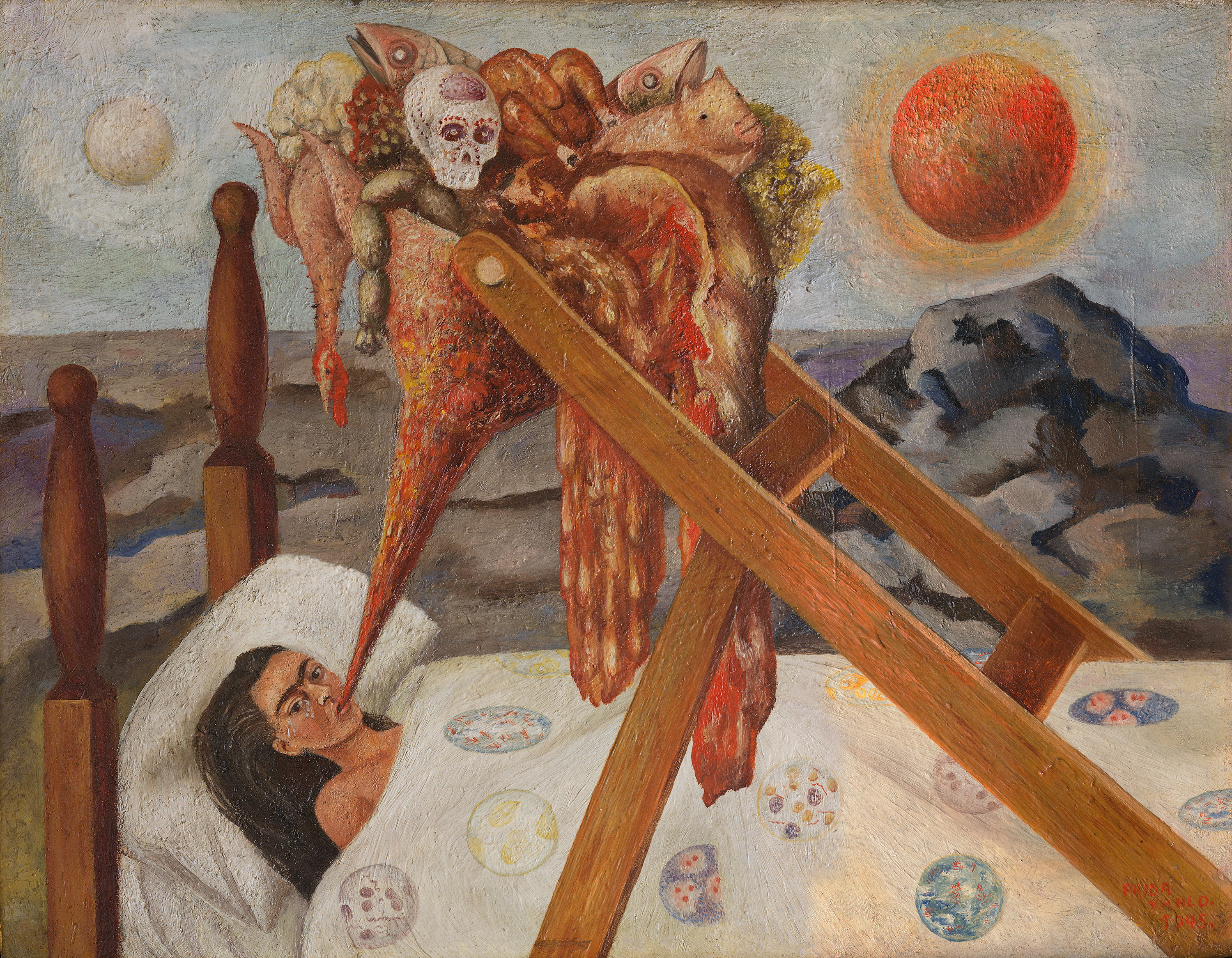 Without Hope is a Surrealist Oil on Panel Painting created by Frida Kahlo in 1945. It lives at the Museo Dolores Olmedo in Mexico. The image is used according to Educational Fair Use, and tagged Self-portraits and Suffering. See Without Hope in the Kaleidoscope

At first glance, this self-portrait by Frida Kahlo reads as a surrealist nightmare. A painter’s easel hovers over the artist’s bed. Instead of a canvas it suspends a gristly funnel delivering dead-eyed fish, plucked chicken, bloody shanks of meat and pendulous entrails, directly into Kahlo’s mouth. Instead of a bedroom, the scene is set in a blasted desert, treeless and alien, the sun and moon suspended in silent witness. More than one-third of Kahlo’s body of work were self-portraits, most examining her physical or psychological pain, yet Without Hope is one of the most grim.

The disturbing imagery is made worse by learning that it was not an invention of Kahlo’s imagination or an overwrought metaphor. In 1945, Frida was bedridden after a failed operation to straighten her damaged spine with a bone graft and steel support. Kahlo had no appetite during her difficult recovery, and her physicians prescribed her force-feedings by funnel.

Force-feeding has an ugly history. Sitting at the one of the farthest extremes of medical intervention, force-feeding was most commonly used as a tool to end hunger strikes by imprisoned people, often targeting women. Striking suffragettes were violently force fed in UK jails until the Prisoners Act of 1913, and in the U.S., activist Ethel Byrne was force-fed while jailed for campaigning to legalize birth control in 1917. Decades after Kahlo’s experience, force-feeding seized public attention after the Spectator published horrifying first-hand accounts by Dolours and Marian Price in the 1970s—the magazine describing the practice as “an experience much worse than rape” and saying “that those who give instructions for forcible-feeding and those who obey should be judged like the torturers of the concentration camps.”

It’s difficult to tell to what degree Frida Kahlo consented to the funnel feeding, but the experience undoubtedly coincided with a totalizing loss of agency and slide into despair. Addressing her treatment in an inscription on the back of the canvas Kahlo wrote: “Not the least hope remains for me...everything moves in tune with what the belly contains.”

So a painting that appears to be surrealist fiction we discover to be horrifyingly literal. The four-poster bed is from Kahlo’s hospital room in New York, the oddly-shaped easel was created by her father to allow her to paint while bed-ridden. The fish and poultry were part of the high-fat slurry pumped into her pulverized body. The sugar skull may symbolize finality but it was a real object too, a weirdly bleak gift from Kahlo’s on-and-off-again, piece-of-shit husband Diego Rivera. The sheets on the bed depict the bacteria that caused recurring infections throughout her life, and the fleshy, oversized funnel was inspired by Alfonso Toro’s engravings of the Spanish Inquisition’s tormento del agua (water torture) from Kahlo’s own copy of La Familia Carvajal. We shouldn't be surprised, as the artist herself said, “I never painted dreams. I painted my own reality.”

Got questions, comments or corrections about Without Hope? Join the conversation in our Discord, and if you enjoy content like this, consider becoming a member for exclusive essays, downloadables, and discounts in the Obelisk Store.

My Nurse and I

The Bird Men of Burnley

The Adoration of the Magi

The Soul of the City