Welcome to Obelisk,
a place to discover art.
ArtistsArtworkMovementsThemesMediumsEssaysQuizzes
HomeAboutStoreDiscordMembership
Themes in Art

The self-portrait is a relatively recent genre. You'd think artists started to paint themselves around 6000 BCE, when humans polished obsidian into the first simple mirrors, or a few millennia later, when copper mirrors were developed in Mesopotamia and Egypt. But nope, the selfie as we know it today didn't appear until 1484, when a 13 year old boy in Nuremberg sketched himself in silverpoint. The boy, Albrecht Durer, became a famous artist and printmaker of the Northern Renaissance, and punctuated his early life with more self-portraits, each more confident than the last. But was Durer really the first self-portraitist? And why do so many artists paint themselves?

While Durer is the first known artist to repeatedly dedicate entire canvases to their own face, he was not the first artist to represent themselves in their work. Throughout the Italian Renaissance, and in Medieval and Persian art before that, many artists had hidden themselves in group scenes, like Sandro Botticelli's 1475 painting of the Adoration of the Magi. You can spot Sandro on the far right—he's the blond in a tan robe. These subtle selfies are called self-inserts, and are less sneaky than they may seem—through history artists have often used patrons as the models for religious or mythical figures. Botticelli's Adoration crams five members of the wealthy and influential Medici family into the scene along with himself. Self-insertion isn't always subtle though. In Jahangir Preferring a Sufi Shaikh to Kings, the Mughal emperor Jahangir accepts gifts from four men: a religious leader, an Ottoman Sultan, King James I of England, and from the artist himself, the court painter Bichitr. The artist stands with international royalty, a bold statement for the early 1600s. 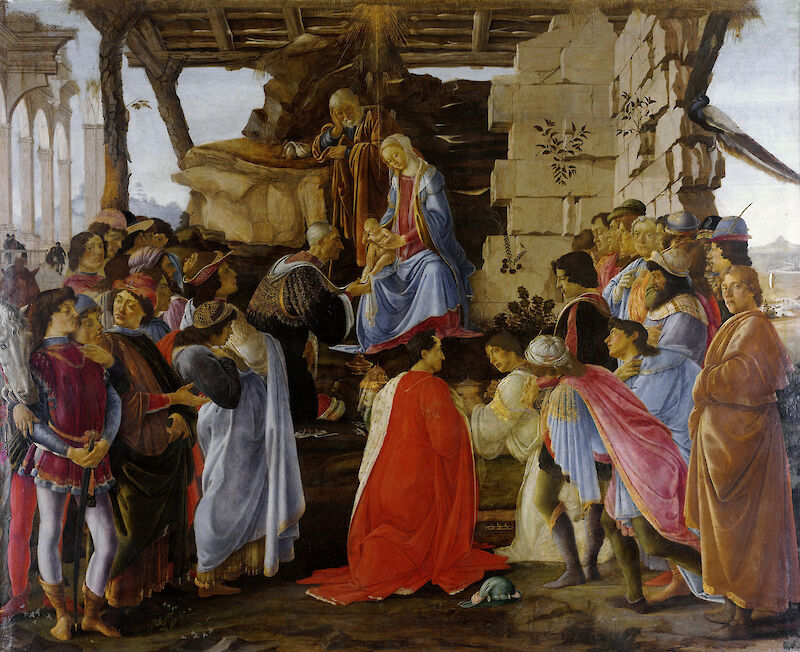 Why do artists create self-portraits?

The self-portrait as we know it today focuses on the artist themselves, often with eyes fixed on the viewer. It's a bold art form, requiring the artist to examine themselves as a subject and to situate their body in the canon. The self-portrait can be a practice of therapy, self-discovery, or personal myth-making. While artists represent themselves for many reasons, here are a few themes to look out for:

Got questions, comments or corrections about Self-portraits? Join the conversation in our Discord, and if you enjoy content like this, consider becoming a member for exclusive essays, downloadables, and discounts in the Obelisk Store.

At The Seaside — Self-portrait Romaine Brooks, 1914

I Only Have Eyes For You Richard Hambleton, 1980

Portrait of a Collagist Benny Andrews, 1989

Portrait of the Artist Mary Cassatt, 1878

Self Portrait in a Striped T-shirt Henri Matisse, 1906

Self portrait in front of flowering trees Paula Modersohn-Becker, 1902

Self Portrait in the role of Jean Valjean Paul Gauguin, 1888

More Themes in Art
View All

Artists of the African Diaspora