Dynamism of a Dog on a Leash 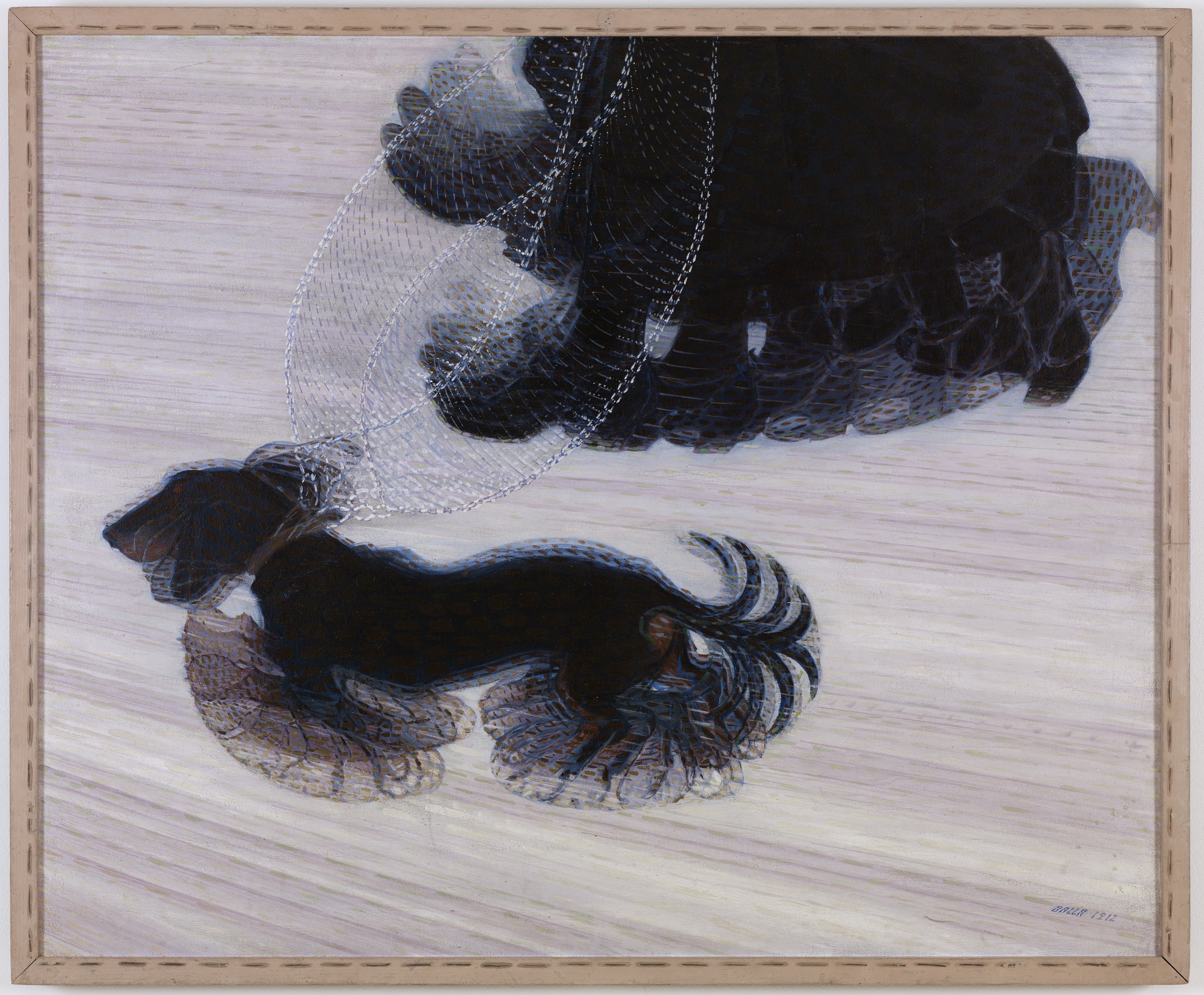 When Giacomo Balla painted Dynamism of a Dog on a Leash he was fusing art and science. Balla was a member of the Italian Futurists, artists obsessed with the increasing speed and industrialization of the modern world. Futurism sprang from a manifesto by the wild poet Marinetti in 1909, and aimed to overthrow the previous generation of art in favor of the art of violence, war, steel and most importantly: speed. “We affirm that the world’s magnificence has been enriched by a new beauty: the beauty of speed.” Aiming to capture the terrifying velocity of their era, Futurist canvases became tornadoes of frantic energy like The City Rises and The Battle of Lights. Compared to those explosively colorful canvases, Dynamism of a Dog is a bit... subdued?

In this nearly monochrome painting of a black dachshund walking with a woman in dark shoes and dress, Giacomo Balla was exploring a new field of technology: chronophotography. Invented by the French scientist Étienne-Jules Marey and made famous by the murder Eadweard Muybridge, chronophotography is a photographic technique where multiple photographs are taken in rapid succession to capture the movement of a subject. Chronophotography had been evolving for almost 30 years by the time Balla painted the puppy, and its influence was already appearing in frenetic Futurist works and like Marcel Duchamp’s famous Nude Descending a Staircase, No. 2.

Back to the dog.

I think the most striking feature of Dynamism of a Dog on a Leash is its quiet sincerity. Most chronophotographic photographs aimed to scientifically capture platonic ideals—horses running, birds in flight, nude women—most paintings inspired by these photographs are also grand in scale and gesture. Dynamism belies its energetic name and focuses on a humble scene that Balla supposedly observed while visiting his student Contessa Nerazzini in near Siena. And good lord did Balla take criticism for this humble work. Artist Cornelia LeBoutillier wrote “Balla takes himself and his dog so seriously, so studiedly, that it is doubtful that any pleasure has ever come out of it anywhere; certainly no movement has.” Critic Henry Hope called it “a cliché of modern art.”

But look closely. Notice how the woman’s shoes dissolve into dashed pattern, how the swinging leash catches the light in four distinct moments, how even the flopping of the dog’s ears is captured. Giacomo Balla painted his share of big brassy futurist canvasses, but Dynamism of a Dog on a Leash may be his most heartfelt.

It took nearly 100 years for Balla’s vision to get the credit it deserves, but in 2014 the prolific historian and critic Robert C. Morgan re-evaluated the work, calling Dynamism “probably the most elegant and accurate works ever painted in the Futurist tradition...moving status into kinesis, stillness into motion, and thus giving life to culture.”

Got questions, comments or corrections about Dynamism of a Dog on a Leash? Join the conversation in our Discord, and if you enjoy content like this, consider becoming a member for exclusive essays, downloadables, and discounts in the Obelisk Store.

Still Life with Apples and Pears