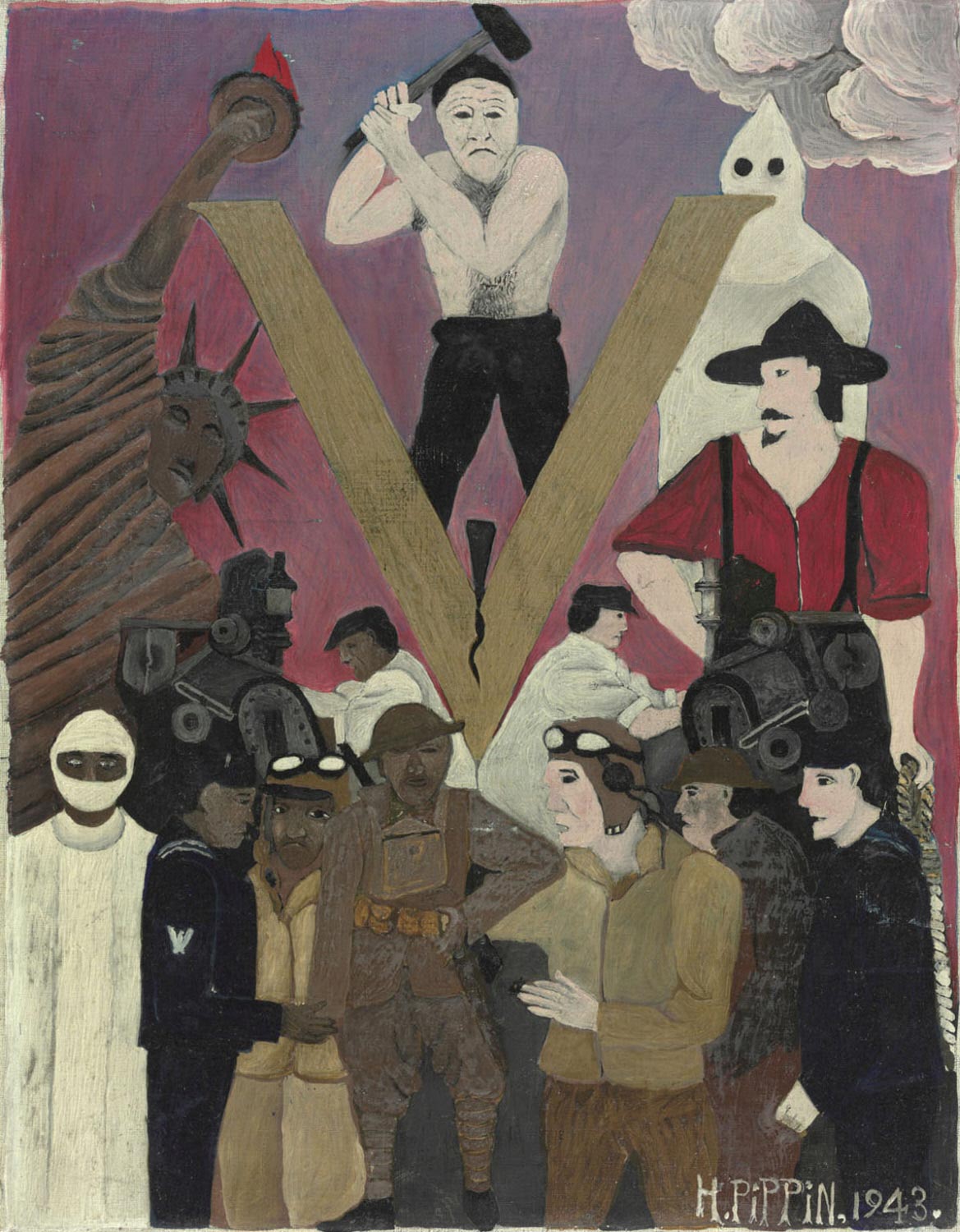 Mr. Prejudice is a Harlem Renaissance Oil on Canvas Painting created by Horace Pippin in 1943. It lives at the Philadelphia Museum of Art in the United States. The image is used according to Educational Fair Use, and tagged Allegory and Injustice. See Mr. Prejudice in the Kaleidoscope

Horace Pippin took a bullet from a sniper in the trenches of France in WWI. Pippin was serving in the 369th infantry, a segregated black unit called the Harlem Hell Fighters, when the shot tore into his right arm. He lost use of the limb, and on his return took up painting for rehabilitation. Pinnin had been a self-taught artist from childhood, but as his arm strengthened from holding a brush, his canvases became tools for a new mission, the creation of an ‘insider ethnography’ sharing the experiences of the African American community. Most of Pinnin’s work described the daily lives of Black Americans, eating breakfast, going to church, studying at home. But in 1943, as another world war raged abroad, Pinnin told the story of his return from war 25 years earlier.

Mr. Prejudice is a small canvas, but it packs a lot in. At its center is a colossal V, referring to both Winston Churchill’s “V for Victory” slogan and the African American “Double V” Campaign. The Double V movement was sparked by an eloquent letter to the Pittsburgh Courier by James Gratz Thompson, and encouraged parallel victories: win the war in Europe, and win the war for racial equality at home.

Pippin’s outlook on victory wasn't so rosy. Despite their legendary bravery, his old unit had been handed off to French command when white American solders refused to fight alongside them. After more days of continuous combat than any other unit its size, the 369th returned to a massive parade through New York, but the celebration only briefly masked the reality of Black life in America—disfranchisement, segregation, debt and racial violence. Valorous service by Black Americans hadn't advanced racial equality in WWI, why would WWII be any different?

A burly white man with dead eyes hammers a wedge into the victory sign, and a crack expands down an already divided canvas. On the left, Black machinists and Airmen, on the right white machinists and airmen. But while the Black men are overseen by a Black Statue of Liberty, the hooded KKK and a white man carrying a noose hover over the white half of the canvas.

Got questions, comments or corrections about Mr. Prejudice? Join the conversation in our Discord, and if you enjoy content like this, consider becoming a member for exclusive essays, downloadables, and discounts in the Obelisk Store.