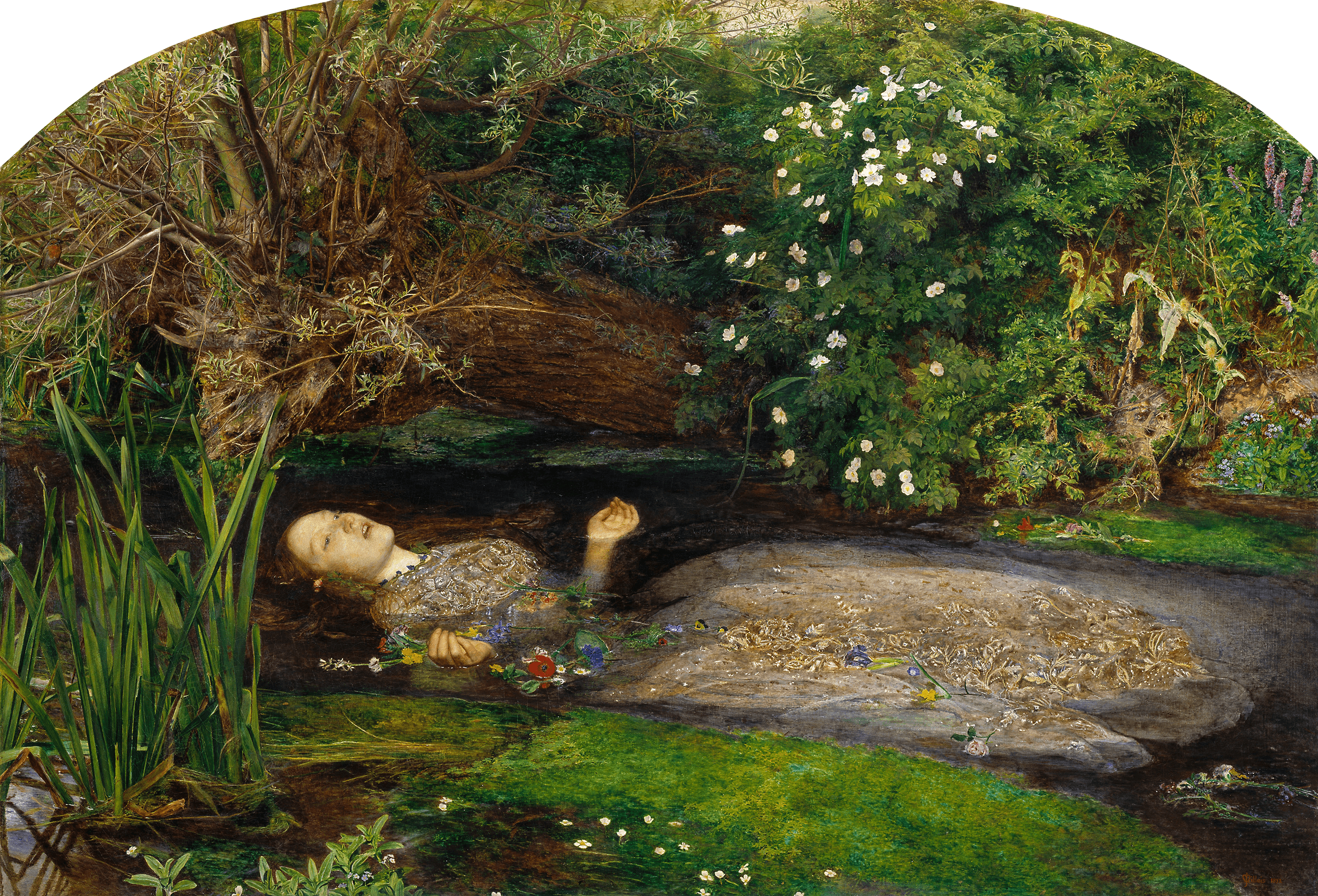 Ophelia is a Pre Raphaelite Oil on Canvas Painting created by John Everett Millais from 1851 to 1852. It lives at the Tate Britain in London. The image is in the Public Domain, and tagged Death in Art and Shaped Canvas. DownloadSee Ophelia in the Kaleidoscope

John Everett Millais, painter and inveterate whiner, was a member of the insufferably romantic boys club called the Pre-Raphaelite Brotherhood. Early in his career, Millais was a dedicated realist, working in a densely detailed style, and at the age of only 22 he began one of his most successful paintings.

Millais began 'Ophelia' in 1851, painting the river and background by the river Ewell near Kingston-Upon-Thames. But painting outdoors is difficult for the time-intensive work of realistic painting, and Millais was sure to let people know of his suffering, describing the experience in a letter: “My martyrdom is more trying than any I have hitherto experienced. The flies of Surrey are more muscular, and have a still greater propensity for probing human flesh ... I am threatened with a notice to appear before a magistrate for trespassing in a field and destroying the hay ... am also in danger of being blown by the wind into the water, and becoming intimate with the feelings of Ophelia when that Lady sank to muddy death, together with the (less likely) total disappearance, through the voracity of the flies ... Certainly the painting of a picture under such circumstances would be a greater punishment to a murderer than hanging.” — J.G. Millais I, pp.119-20.

It was Elizabeth Siddall, Millais’s model for Ophelia, who truly suffered. Siddall had to lie in a bath of water, heated by oil lamps, and caught a cold so dangerous her father threatened to sue Millais for £50.

Unfortunately for Millais, his mournful painting of Ophelia was shown at the Royal Academy Exhibition in 1852, the same exhibition that Arthur Hughes debuted an entirely more vibrant, expressive portrait of Ophelia. Critics panned Millain’s Ophelia, and The Art Journal offered his only backhanded compliment, saying: “Yet what misconception so ever may characterize these works, they plainly declare that when this painter shall have got rid of the wild oats of his art, with some other vegetable anomalies, his future promises works of an excellent, which no human hand my have yet excelled.”

Got questions, comments or corrections about Ophelia? Join the conversation in our Discord, and if you enjoy content like this, consider becoming a member for exclusive essays, downloadables, and discounts in the Obelisk Store.

Christ in the House of His Parents

Four Seasons in One Head

Iris in a Vase