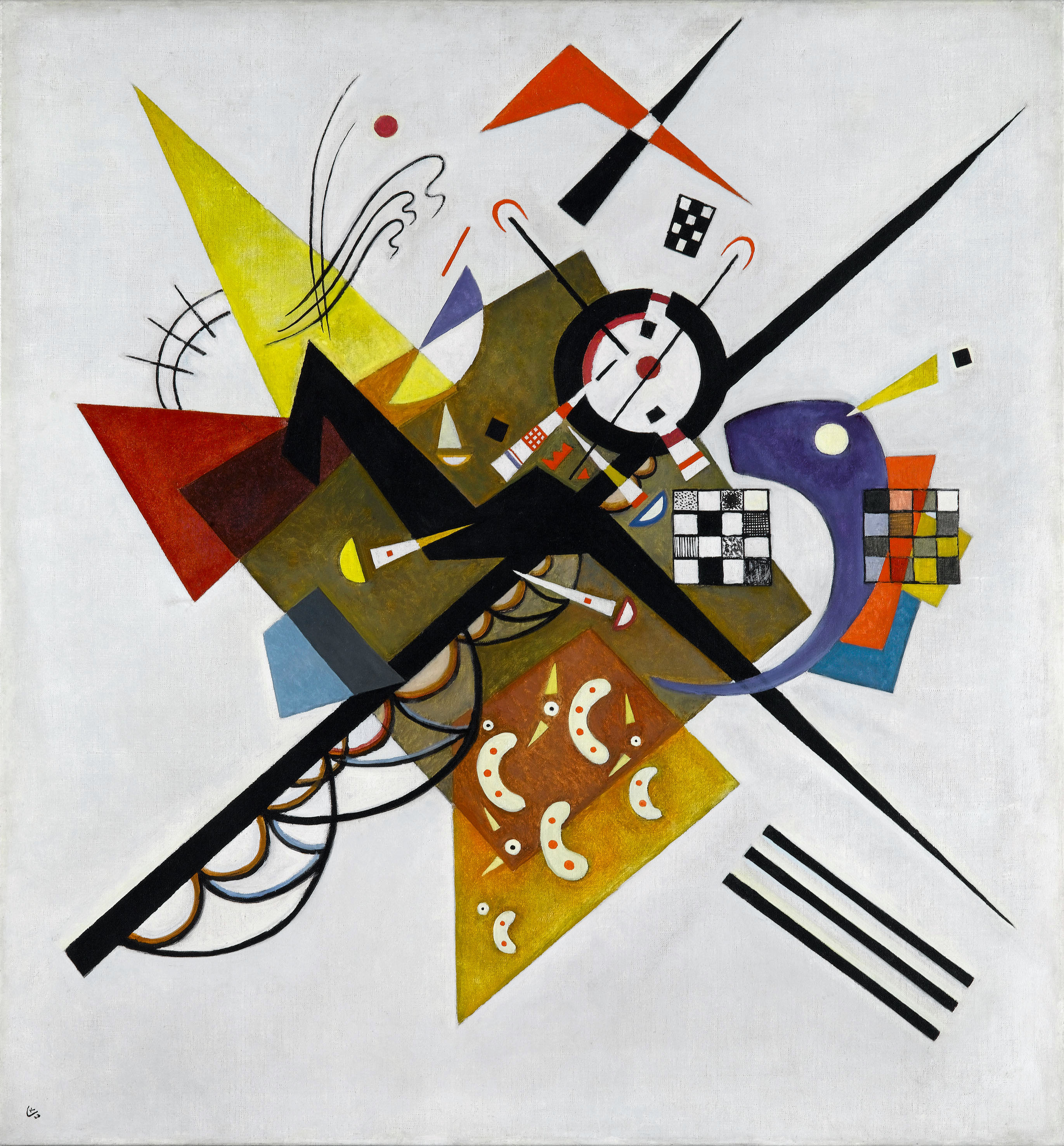 On White II is an Early Modernist Oil on Canvas Painting created by Wassily Kandinsky in 1923. It lives at the Centre Georges Pompidou in Paris. The image is in the Public Domain, and tagged Abstract Art. DownloadSee On White II in the Kaleidoscope

Half the fun of abstract modernism is in playing the endless guessing game of interpretation. And if you're looking for an artwork to practice wild theorizing on, let me recommend On White II, Wassily Kandinsky’s volcano of color and shape exploding from the center of a white canvas. It’s a striking composition—a brightly energetic burst of angular line, color, and pattern. And while there doesn't appear to be any specific objects represented (does the clock count?) there is very clearly something going on.

What are we looking at?

Some critics point to the geometric shapes as an influence from the Suprematist painter Kazimir Malevich, others read into the dualism of light and dark, claiming that death is emanating from the center of the image to swallow life’s colorful moments. Another theory springs from Kandinsky’s apparent synesthesia, a condition where one sensory input may trigger another. Might Kandinsky, who once wrote “the sound of colors is so definite that it would be hard to find anyone who would express bright yellow with bass notes or dark lake with treble” have painted On White II as a depiction of a specific piece of music he was listening to? More concretely, the Centre Pompidou suggests in their item label that the jagged black X shape at the composition’s focal point is an abstracted depiction of St. George and his lance, a Russian symbol of valor and victory and a subject often repeated in Kandinsky’s work.

What do we know?

In the absence of writings by Kandinsky about On White II, here’s what we do know. Auf Weiss II, as it’s called in the original German, was painted by Wassily Kandinsky while in staying in Weimar, between February and April of 1923. We know that Kandinsky was fully obsessed with the impact that color and form had on human psychology. At the time of its painting, Kandinsky was teaching courses on design theory at the Bauhaus school, and writing the book he published three years later called Point and Line to Plane. Most significantly, we know that on returning to his home at the Bauhaus in Dessau, Kandinsky mounted the canvas in a place of honor in his dining room. We may never know what On White II is about, but we know that Kandinsky was pleased with it.

Got questions, comments or corrections about On White II? Join the conversation in our Discord, and if you enjoy content like this, consider becoming a member for exclusive essays, downloadables, and discounts in the Obelisk Store.

Composition with a Circle