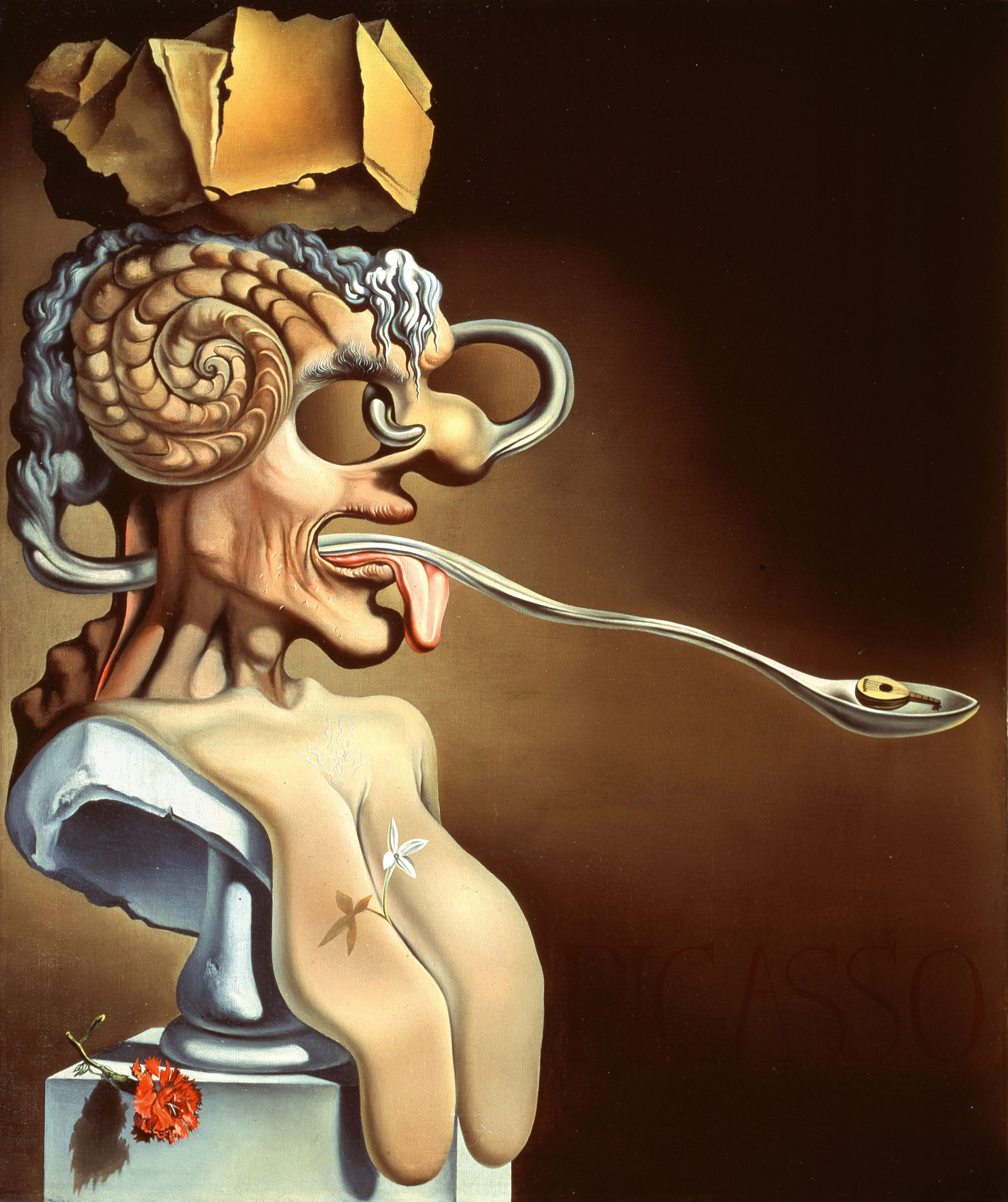 Portrait of Picasso is a Surrealist Oil on Canvas Painting created by Salvador Dalí in 1947. It lives at the Dalí Theatre and Museum in Spain. The image is used according to Educational Fair Use, and tagged Portraits. See Portrait of Picasso in the Kaleidoscope

A portrait like this makes you wonder if Dali hated Picasso. Salvador Dali was 22 years old when he made his first pilgrimage to the studio of the already world-famous Pablo Picasso in 1926. Picasso was 45, and already had his blue period, obsessed over African art, co-fathered cubism with Georges Braque, and was beginning to explore in André Breton’s new movement: Surrealism.

Dali was young but already making impressions in the Madrid avant-garde for his dramatic dandyism and dabbling in the Dadaist and Futurist movements. Meeting Picasso was hugely influential to Dali, at first as similarities in Dali’s immediate work, exploding into a heated exploration of surrealist ideas in the early 1930s and maturing into an strange, one-sided obsessive correspondence. Dalí, and later and his wife, Gala, sent Picasso more than 100 letters and postcards before the elder artist’s death in 1973.

The pinnacle of this odd relationship between two Catalan artists can be seen here, in Dali’s 1947 portrait of his idol, counterpoint, and rival. The full name of this hideous, melted form is Portrait of Pablo Picasso in the Twenty-first Century (One of a series of portraits of Geniuses: Homer, Dali, Freud, Christopher Columbus, William Tell, etc.) The portrait is full of mixed messages, as you'd expect from the inveterate trickster. Dali presents a bust imagined more than 50 years in the future—Picasso is still venerated, but his form is warped and horrifying. His chest sags into flat dangling breasts, his tongue lolls from wrinkled lips, and a metallic nose loops through empty eye sockets. It’s a discomforting visage that could be read as an aggressive take-down of a hero, but the iconography tells a different story. A fleshy, spiraling rams horn in place of an ear is a symbol of vitality, leadership and authority, and a long loop of grey hair, extends finger-like out of the mouth, terminating in a spoon holding a tiny mandolin, a favorite subject of the old painter.

Nothing is ever quite what it appears with Dali, and surreal visions aren't always meant to be interpreted. Dali is quoted as saying, “I do not paint a portrait to look like the subject, rather does the person grow to look like his portrait.” A portrait is always an homage, and here we see a modernist master through the twisted lens of a rival, obsessive, and possibly, friend.

Got questions, comments or corrections about Portrait of Picasso? Join the conversation in our Discord, and if you enjoy content like this, consider becoming a member for exclusive essays, downloadables, and discounts in the Obelisk Store.

Interior with a Woman