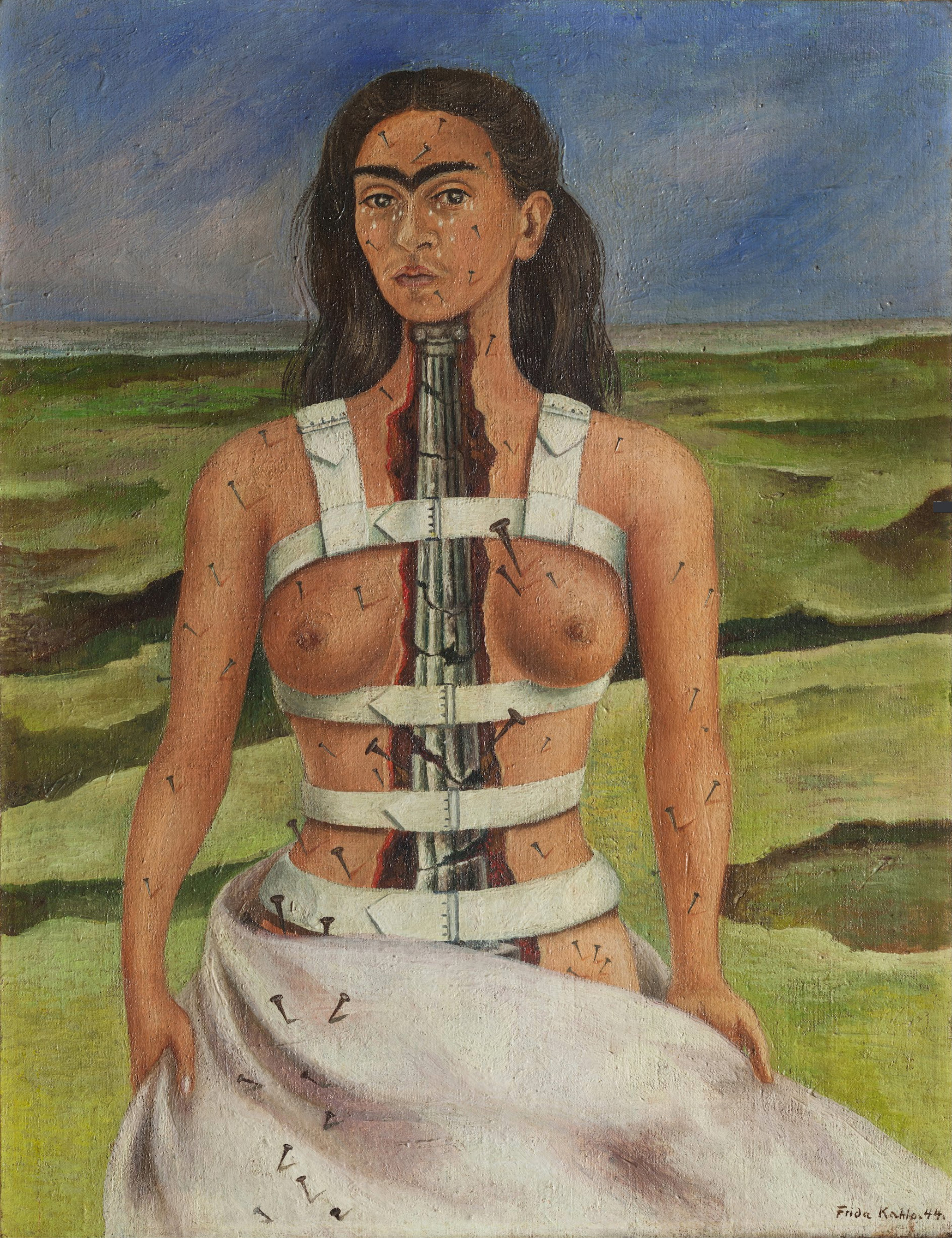 The Broken Column is a Surrealist Oil on Panel Painting created by Frida Kahlo in 1944. It lives at the Museo Dolores Olmedo in Mexico. The image is used according to Educational Fair Use, and tagged Self-portraits and Painting. See The Broken Column in the Kaleidoscope

Her gaze is serene but distant, an odd expression for someone with 57 iron nails piercing their face, arms, torso, and right leg. Frida Kahlo locks eyes with the viewer, despite the rain of white tears down her face. Her posture is ramrod straight, enforced by the metal polio support that Frida wore as a child. Inside the steel cage, her body is rent open, a jagged cut from chin to pelvis revealing a shattered ionic column in place of her spine. From 1944 to 1946, Frida Kahlo painted a sort of spiritual triptych—three surreal self-portraits that capture the layers and complexities of human agony in gut-wrenching detail. This work, The Broken Column, was the first.

Pain, for Frida, was a lifelong companion. Before she was even born Frida suffered from spina bifida, a birth defect of the spine that leaves spinal nerves exposed through an opening in the back, the first of many conditions that escalated and compounded over the course of her life. At age six, Frida contracted polio, which deformed her right leg, leaving it prone to ulcers and eventually gangrene and amputation later in life. In 1925, at 18, Frida barely survived a catastrophic street car crash that further displaced vertebrae in her spine, crushed her right foot, and pierced her pelvis with a steel handrail.

During her recovery from the tram accident, Frida began to paint. She asked her father if she could use his oil paints and brushes, and worked from an easel mounted over her bed. “I felt I still had enough energy to do something other than studying to become a doctor. Without giving it any particular thought, I started painting” she wrote.

Frida painted The Broken Column nearly 20 years after the streetcar crash, at the beginning of a ten year deterioration of her health. By 1944 Frida’s spine and right leg caused her chronic pain, and she was unable to sit or stand without one of her many surgical support corsets. That year she underwent one of many spinal surgeries attempting to correct previous damage and provide some neurological relief, and The Broken Column was painted during her recovery.

It is an undeniably heroic self-portrait, grimly modernizing the classical motif of Saint Sebastian’s martyrdom by puncture. Like the saint, her injury does not diminish her beauty and poise. Though her body is pierced and her spine cracked, she stands upright. Though she stands in an empty, strip-mined landscape, she breaks her isolation by engaging us, the viewer. This image perfectly depicts pain, certainly, but also bravery. Her pain was a constant, but her courage and resolve made her the icon she is today.

The Broken Column was the first of three paintings that capture Frida’s struggle with pain, helplessness, and hope while recovering from three failed surgeries in 1944, 1945, and 1946. Without Hope is the second piece, the true low point, depicting the tortuous force-feeding she endured after a failed operation to fuse vertebrae in 1945. After a surgery she referred to as “the big operation” in 1946, Frida painted the third heartbreaking self-portrait. This time, the artist is represented as two people: a broken, scarred self, and the hopeful self, the imagined self—triumphantly healed, holding in one hand the corset she no longer needs, and in the other a flag reading arbol de la esperanza, mantente firme, “tree of hope, stand firm.”

Got questions, comments or corrections about The Broken Column? Join the conversation in our Discord, and if you enjoy content like this, consider becoming a member for exclusive essays, downloadables, and discounts in the Obelisk Store.

Self-Portrait with Thorn Necklace and Hummingbird

Portrait of My Father

Introduction of the Cult of Cybele in Rome