The Abduction of Psyche 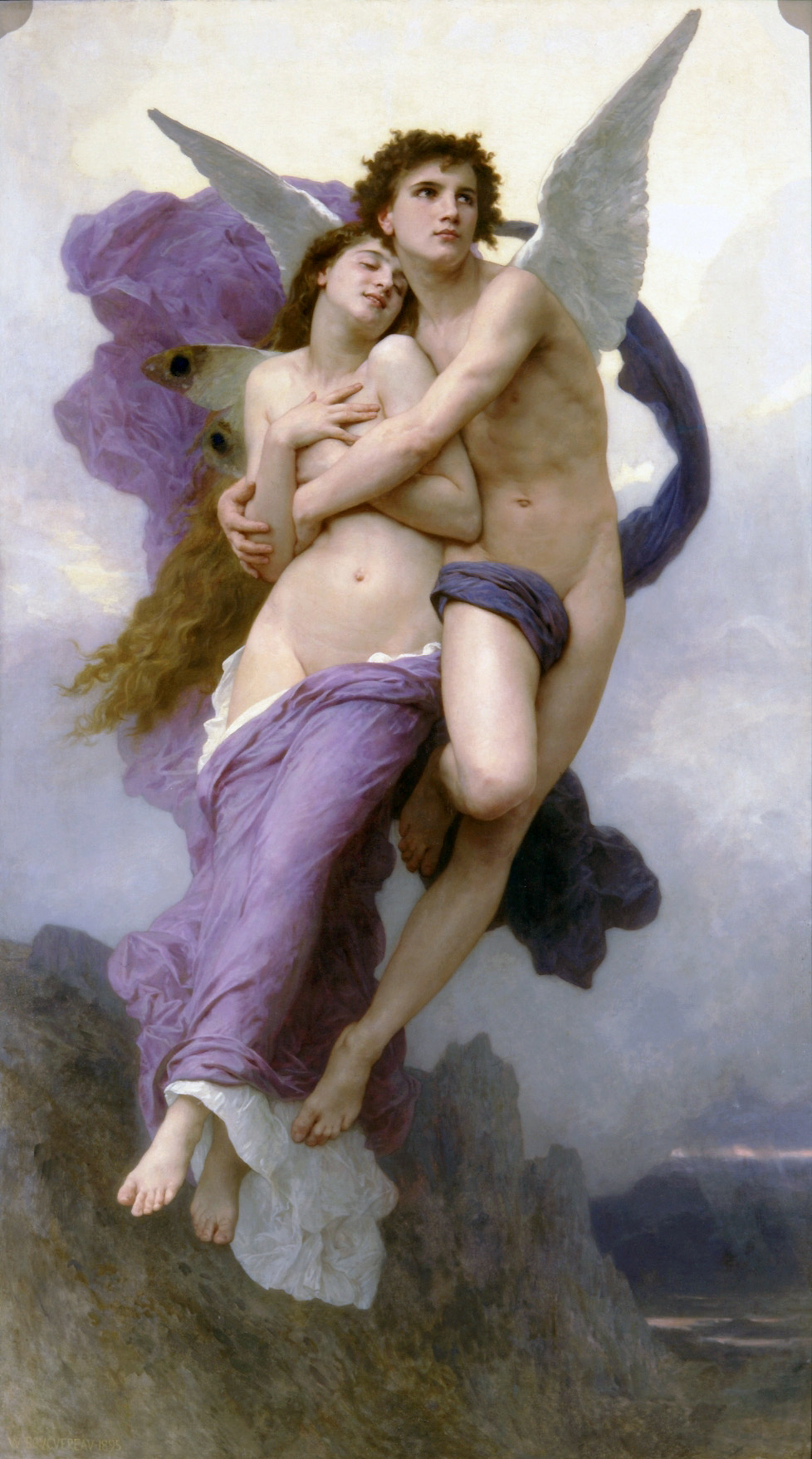 William-Adolphe Bouguereau loved a sickly-sweet romance, and the story of Cupid and Psyche was a perfect inspiration. Like his fellow Neoclassical artists, Bouguereau often depicted scenes from the classical stories of ancient Greece and Rome for inspiration. In this nearly life-sized painting we see the titular Psyche swept into the air by a curly-haired man sporting white wings. They're both physically perfect, incredibly beautiful, and rendered in the delicate pinks and creams that make Bouguereau’s figures instantly recognizable.

So what’s happening in this melodramatic scene? Its title, The Abduction of Psyche, is at odds with Psyche’s serene, almost ecstatic expression, but ‘abduction’ seems to be a mistranslation. In the original French this work is called “L'enlèvement de Psyché” which may also be translated as The Rapture of Psyche, and that’s our clue.

The story of Cupid and Psyche is an excerpt from the book Metamorphoses, written in the 2nd century AD by the Roman prose author Lucius Apuleius Madaurensis. It’s a story-within-a-story, and a deeply compelling one, packed with vengeful gods, heroic trials, and star-crossed love. The scene Bouguereau depicts here is an important one: the transition from the physical realm to the heavenly.

An oracle had foretold that the beautiful princess Psyche would marry a monster that neither gods nor men could resist, and that this monster waited for her on a mountain top. With lamentations and a funeral dirge, Psyche and her family climbed the high peak and leave her there to await her fate. But instead of a monster, Zephyr, god of the west wind, gently carried Psyche to a heavenly meadow where she met her prophesied partner, the young god Cupid. This is the moment Bouguereau has captured—Psyche, overcome with relief, swept off to her new life.

The story does not end here for poor Psyche. Her happy ending will be hard won. I fully recommend giving the full story a read here.

Got questions, comments or corrections about The Abduction of Psyche? Join the conversation in our Discord, and if you enjoy content like this, consider becoming a member for exclusive essays, downloadables, and discounts in the Obelisk Store.

The Virgin, the Baby Jesus and Saint John the Baptist

The Birds Nest, or In The Woods

A still life of mackerel, glassware, a loaf of bread and lemons

The Gardener - Old Peasant with Cabbage

Norway, Sandviken Village in the Snow